Under These Restless Skies: A Fascinating New Portrayal of Anne and Mary’s Relationship 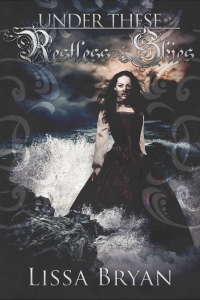 She found the queen seated at her writing table, nibbling on the end of her quill pen. Her ladies were scattered nearby, engaged in sewing shirts while they gossiped or listened to Jane Parker reading the Bible from a stand by the window. Anne looked better than she had in a while. There was a sparkle to her eyes and her cheeks had color once more. Emma bobbed a curtsey to her and Anne smiled at her before going back to studying the paper laying on the desk.
“What are you writing?” Emma asked, perching herself on the stool nearby.
Anne glanced around before she answered. Jane Parker was the closest lady, and she was engaged in reading aloud. Her voice would cover Anne’s low tones. “A letter to Lady Shelton, the guardian of Prin—of the Lady Mary. ’Tis time to end this war between us. She will not bend and acknowledge me as queen, and I am not willing to break her spirit to force her.” She dropped her pen into the ink bottle and rubbed her temples in exasperation. “I trow, that girl . . . She is my death, or I am hers.”
Emma rolled her eyes. “Let not Chapuys hear that, or he will write to the Emperor again that you threatened once more to kill Mary.”
“Were I planning to, I would have done it long ere now,” Anne said with a wry shake of her head.

“Did something happen?” Emma had worried a bit about the situation, certain Mary would hate the infant Princess Elizabeth. Passing on cruelty to others was how some humans reacted to being mistreated. But, according to everyone at Elizabeth’s court, Mary loved her baby half-sister and spent hours holding her, singing to her and playing with her. When she wasn’t with the princess, Mary could often be found sewing clothes for the baby.
“She is falling ill again,” Anne sighed. “She refused to eat in the great hall because Elizabeth was given the seat of honor at the table, and Mary was seated with the maids. She took her meals in her room until Lady Shelton put a stop to it. Now she takes her seat at supper as required, but refuses to eat anything except what little bits her servants smuggle to her after meals. It has gotten worse since my uncle, Norfolk, went to visit her, to try to force her to sign the Oath.”
“I heard of that,” Emma said. Anne’s uncle was a cruel man. “Margaret Wyatt told me Norfolk shouted at Mary and said if she was his daughter, he would smash her head into the wall until it was as soft as a baked apple. Margaret said people are shocked. Even if—Mary may be a bastard, but she is still the king’s daughter.”
“And verily, I will be blamed for it.” Anne sighed and toyed with the sand shaker. It hadn’t been her decision to send Norfolk.
She was horrified at the latest scandal that had the entire court whispering behind their hands. Norfolk had installed his mistress at his family home and ordered his household to honor the lowborn girl as though she were his wife. When his real wife, the Duchess, objected, he had his servants beat her and locked her away in her chambers, taking all of her clothing and jewels so she could not escape. The Duchess had managed to smuggle out a letter to Cromwell pleading for help, but her children were so horrified she had dared to complain about their father to an outsider, they refused to take her in. The Duchess was at liberty once more, but refused to give Norfolk the annulment he wanted so he could wed his mistress. 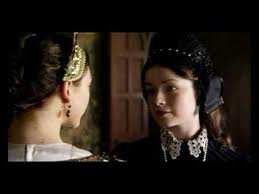 Anne read back over her letter. “Intimidation and threats have not worked, so perhaps kindness will. Now I am certain I am with child, it makes little sense to continue trying to force Mary. I know what will happen to her: as soon as my prince is born, she will be shuffled off into obscurity in the country, likely married off to some non-entity. ’Twill be beneath her dignity, but methinks she will be happier.”
“ ’Twould be best,” Emma agreed. Mary would be happier as a wife and mother, if her treatment of Princess Elizabeth was any indication.
“I should think her political ambitions will die with her mother.”
“Is Katharine ill unto death?”
Anne nodded. “She has been in steady decline and ’tis said she will not live much longer.”
“ ’Tis sad,” Emma said, and Anne gave her an odd look. “Will said she is a kind lady in lonely conditions.”
For a moment, Anne’s brow creased and her eyes flashed, but then she shook her head slightly. She ran her finger down the edge of the feather and kept her gaze on it as she spoke. “Aye, he says but the truth. Katharine is a kind lady. Even to me, she was always courteous. And it is sad she has to die in exile from those she loves, but ’twas her choice.”
“Anne, what choice did she have?” Emma said. “If you were in her place, would you agree to make your daughter a bastard?”

Anne gave a small smile. “Nay, I would fight until my dying breath to preserve Elizabeth’s rights. But still, ’tis a choice. In that respect, the break with Rome was as much her doing as it was the king’s. She knows it, too. She said as much to Chapuys when he visited her earlier this week.”
Emma blinked in surprise. “The king allowed that?” For a long while, Henry had refused to even speak to the Imperial ambassador after he dared to chide Henry in front of the court about his treatment of Katharine.
“Aye, if he did not, Chapuys might think there was something suspicious about her death.” Anne took another glance around the room to make sure no one could overhear them. Jane droned on, her reading covering their murmured conversation. “Henry stopped yesterday in the presence chamber and embraced Chapuys. He told him that as soon as Katharine died, the point of conflict between the Emperor and England would be gone and they could be friends again.”
The quill snapped between Anne’s fingers. She dropped the pieces on the desk and pressed her palms to the surface, the fingers splayed. “Verily, I know the king has reasons enough for an alliance with the empire once more, but of late, it feels as though he is rejecting anything I support, merely for sake of its association with me.”
Emma didn’t know what to say. She did not know the political situation well enough to reassure Anne about Henry’s intentions. Nor could she say she didn’t think Henry would be petty enough to make political decisions based on spite. On impulse, Emma kissed her on the cheek and Anne blinked in surprise before giving Emma a swift hug. “I know not how to say what is in my heart, Emma, except to thank you for being such a true friend to me.”

Learn more about Under These Restless Skies at Goodreads.

Watch the Under These Restless Skies book trailer on YouTube.