Staging Tudor History – A Review of “Bring Up the Bodies” 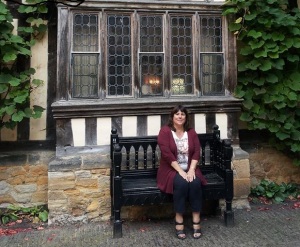 Denise Hansen has an academic background in history and education and worked for 30 years with Parks Canada in Halifax, Nova Scotia. She is a self-confessed Tudor history fan with a special interest in Anne Boleyn.

Full disclosure here. My sole previous experience with the West End London Theatre world consisted of the viewing of “No Sex Please, We’re British” almost thirty years ago.  So I was bound to be impressed, especially when the subject of the play was of intense interest to me, a self-confessed Tudor history addict with a healthy obsession with Anne Boleyn.   I live in Halifax, Nova Scotia (Canada) but a trip to London was in the offing this September, 2014.  I looked into buying tickets to the Royal Shakespeare Company’s “Wolf Hall” and “Bring Up the Bodies”, theatrical adaptations of Hilary Mantel’s prize-winning tales of Thomas Cromwell, Henry the VIII’s politically adept henchman who was instrumental in the fall of Anne Boleyn.  When I learned that the successful runs of both plays had been extended I couldn’t resist and booked an expensive  solo ticket to a Saturday evening performance of “Bring Up the Bodies” at the charming, Edwardian-era Aldwych Theatre.  I was not disappointed in the production and the play certainly did what good drama is supposed to do – told a story well, entertained the audience and evoked an emotional experience.  Plays which deal with historical content cannot avoid serving as  “history writ large” and Mike Poulton’s re-work of Mantel’s second book in the Cromwell trilogy successfully pares down hundreds of written pages into a riveting three hour production, without sacrificing too much of Mantel’s trademark witty dialogue.

The stage set was minimalist but effective, with quick, subtle scene changes and the looming presence of a carved cross. The somber grays and browns of the interior set designs were a good contrast with the rich hues of the Tudor costumes, including a memorable scarlet gown worn by Lydia Leonard’s Anne Boleyn.  I was impressed with the narrow strips of real fire which appeared at random times  in the stage floor to depict those ever-present Tudor fires, despite the fact that the effect is far from magically achieved, considering  today’s propane fireplaces.  Snow fluttered from a backlit sky which illuminated Katherine of Aragon’s January funeral and sitting actors swayed into oarsmen escorting Anne Boleyn on her last journey on the Thames.  Cardinal Wolsey and Sir Thomas More appear as ghosts, realized figments of Cromwell’s powerful imagination.

The acting was quite wonderful and totally professional. Ben Miles (Thomas Cromwell) lacked the thuggish physicality of the man captured in Holbein’s portrait but he brought a chilling calmness to the role, conveying a snake-like skill in coercion. Nathaniel Parker’s mercurial Henry VIII was part love-sick buffoon, gregarious “bluff King Hal” and the raging lion once alluded to by Sir Thomas More. Jane Seymour was portrayed by Leah Brotherhead ably but I was distracted by her annoyingly high-pitched, whiny voice.  I was surprised to realize from the play program that several actors played multiple roles. For example Lucy Briers played both Katherine of Aragon and a scheming Lady Rochford.  The many characters which peppered Henry’s court were painted in broad strokes and we are given a rather foppish, earring-bedecked George Boleyn and an Eustace Chapuys with an accent that reminded me of something out of a Monty Python movie.  John Ramm played an effective Henry Norris, the oldest of the men accused of adultery with the Queen and one of Henry’s closest friends.

The first half of the play was darkly comic in places but the second was more serious and befittingly tragic. The term “Bring Up the Bodies” is a judicial expression used to summon up accused prisoners for trial but it was also suggested in a more literal sense with a grim scene showing the linen-wrapped, bloody corpses of the five men executed for adultery with the Queen. It expands from the novel with Cromwell’s matter-of-fact suggestions for identifying the headless bodies for burial through physical details that convey the intimacy of the Tudor Court – “Smeaton’s fingers will be worn from the playing of the lute”, “Norris has a scar from a jousting accident”. I was quite moved by that scene since all the executions are shown off-stage. 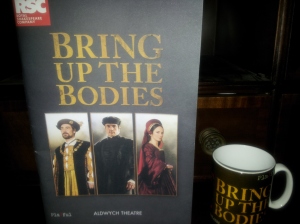 But what of Anne Boleyn – the character who I was most interested in?  Mantel is not gentle in her portrayal of Anne Boleyn in her novels and evokes what author Susan Bordo (“The Creation of Anne Boleyn”) refers to as the “default Anne” – a shrill, ambitious, viscously smart woman who will stop at nothing to maintain her position. Of course the Anne in “Bring Up the Bodies” is certainly not Anne at her best as she becomes increasingly desperate and isolated, like a cornered animal.  I did not expect a different Anne in the play and Lydia Leonard admitted that she wanted to honour Anne but says; “I personally feel more of a commitment to playing Hilary Mantel’s Anne Boleyn because that’s what going to make the whole story turn.” (RSC, “Bring Up the Bodies” Aldwych Theatre Program).  So we are given an Anne who strides more than walks, who shouts more than talks and who can only be described as unrelentingly haughty. She is however witty, articulate and fiercely intelligent. We occasionally see Cromwell’s wary acknowledgement of this. In fact, Anne was once his ally until the tides turned and Henry desired to be rid of her.  As in the books, the play is quilty of the “sin of omission” regarding Anne Boleyn, and all mention of her corroborated trial speech and anything else that painted her in a more favourable light is quite glaringly absent.   The question of her guilt is left ambiguous though and the play convincingly conveys the awful power of rumour and innuendo in a personality-driven court with so much at stake.  Cromwell’s successful coup was partially a product of luck and timing but the events were molded by a man who was a master of psychological manipulation.

The play does allow for sympathy for Anne. Her execution is not shown on-stage but viscerally rehearsed for Cromwell by the French executioner. There is one line uttered by Cromwell which really resonated.  He remarks on Anne Boleyn in the days just prior to her execution and it is an insightful statement of how far she has fallen – “She has lost her self. All we have to do is bury her.”  For me, that “self” is not the ruthless, scheming political animal of Mantel’s books and this play, but a multi-faceted, courageous woman who by this time had lost friends, family and the love of her King.